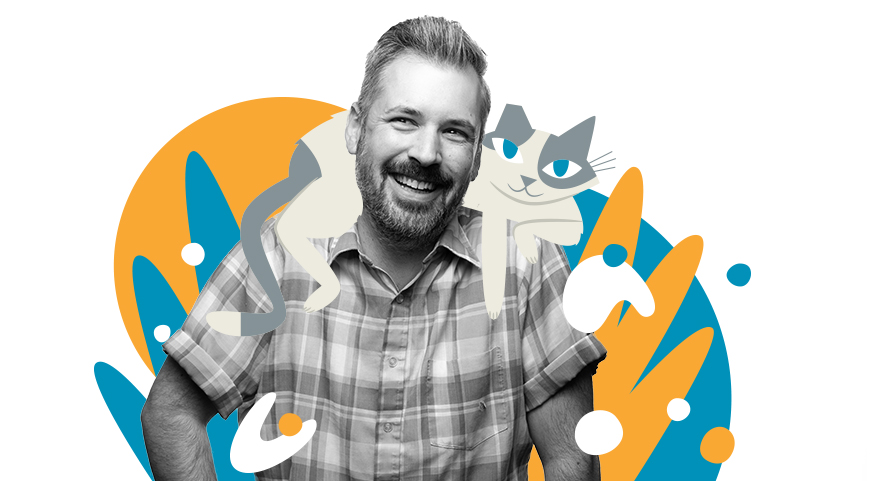 Benjamin Della Rosa is a Graphic Designer and Illustrator at Eyeconic. He designs everything from emails to Eyeconic brand characters! Here’s a list of things we know and love about Ben.

He has a sweet car that makes an appearance in Eyeconic photoshoots.

Ben: Yeah, I have a ‘64 Plymouth Valiant that we’ve used for social media photo shoots. It only broke down once, but that was after we had used it for the day. My biggest fear was that it would break down during the shoot, but fortunately it didn’t. My wife and I got it just because we wanted a fun thing to have. She looked around on the internet for a while and came across this one, so we bought it! It was sitting in some guy’s garage for years and he knew he was never going to drive it again. 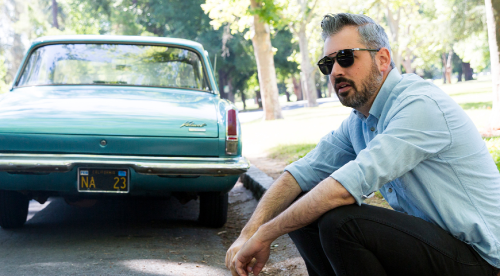 Ben: Prior to working with Eyeconic, I was self-employed for 10 years. I’ve done a lot of work for small businesses; I designed logos and artwork for quite a few restaurants in Sacramento, CA. I have a mural on the side of a building by Del Paso Boulevard neighborhood. My wife Rose and I worked together on a restaurant, which was a great experience! I worked back with the owners to develop the brand identity, and my wife Rose designed the interior. In addition to restaurants and bars I’ve done all the packaging and design for coffee shops and also a pomade company; I designed their pomade jars.

He was featured in Communication Art Magazine.

Ben: We have a studio in Verge Center for the Arts called Interval Press. A friend of mine that I’ve known since kindergarten, Kyle, and I both relocated to Sacramento at different times in our lives. After college, he and I started making art together. I was starting out on my own, he had just graduated, and we were looking for something to do. We went and talked to an old professor of ours and she just gave us the advice to start making stuff. Kyle and I wanted to do silk screening but didn’t really know how to do it. We taught ourselves in addition to taking a class at Sac State. A year or two later, Hans (another designer on the Eyeconic team) and a former professor of ours joined us. The four of us have a collective at Verge and we’ve been doing stuff there since 2008. Communication Art Magazine was interviewing printmakers in California for a March/April 2016 issue and we were referred to them by someone anonymous, and we got featured!

He was a freelancer for 10 years before joining Eyeconic.

Ben: That’s actually a really funny story. When I first started out of college, I was not very good at holding a job down. I had always been doing side work in graphic design and I always came back to it--even if I was working in a studio. I knew a professor from Sac City that also did similar work on the side. I had lost my job in 2005 and he took me under his wing and brought me in on some projects that he was working on in addition to just work that I was bringing in myself. He later took the position of Department Chair at the local college and wanted to focus solely on teaching... so he offloaded all his client work onto me. That was kind of how I got my start and I just kept it going from there. Eventually the freelance work somewhat dried up; I reached out to Hans asking if he knew of any opportunities. He reached out and within 2 or 3 days and I was brought in for an interview for VSP Global and Eyeconic.

He is “mad for plaid,” if you couldn’t already tell from his picture!

Ben: I was visiting family this weekend, it was my dad’s birthday and as I was driving back I was thinking about how I would respond to this “fun fact” about me. I was trying to think, like, why I wear so much plaid. I think it’s just this unconscious thing that I do. My grandpa wore it a lot, which carried over to my dad wearing it a lot. In high school when I transitioned from wearing t-shirts all the time, to then wearing button ups, I would just steal shirts from my dad’s closet. I guess it just stuck. I did the very 90s thing of having a plaid shirt unbuttoned with a graphic tee under it. I’ll never forget this; someone told my dad that when I started wearing his shirts, “Just watch as the transition from adolescence to adulthood is when he starts buttoning them up.” I just got tired of shirts blowing in the wind, so I would button them up. But I always had that comment in the back of my head. When I’d get home on the front porch I’d unbutton it before going into the house to make a point.

He has a cat named Homie.

Ben: Well I also have a cat—named Cat. My wife was in the backyard once and saw a stray cat. I told her if she fed it that it would keep coming back… and that’s how we ended up with Homie. But before we adopted Homie and she would eat outside, we noticed that Cat would just sit at the door and stare at her while she was eating. Homie hated it. They’ve had their cat fights. Now other stray cats will come and eat the food outside, and Homie will sit and stare at them. In addition to other stray cats, there have also been a blue jay and possum that munch on the food out there. So, now we have a quasi- pet possum and blue jay.

From our Creative Director who oversees Ben’s awesome work:

“Ben is awesome. He also really likes plaid; sometimes I’ll go to him asking his opinion of my plaid shirts. He’s a great illustrator and animator—he helped develop the Eyeconic brand illustration style. He was, and still is, a huge part of our retail store rollout; we are lucky to have him!”

Ben doesn’t wear glasses, but he loves sunglasses! His favorites are Ray-Ban frames like the RB3016 Clubmaster or some cool Cole Haan suns.